Jason, born on the 25th of July 2019, is the son of Dimitris, grandson of Captain Gerasimos & Mariedo and the undisputed leader of the Odysseia company. Jason, named after the infamous Jason & the Argonauts, will guarantee you an unforgettable experience onboard.

Owner and Captain of the ship, Gerasimos was born in Nidri and has spent his life on the sea, working as a sailor since the age of 15. His many duties and work on cargo ships has taken him all around the world.He was one of the chosen few who actually worked for Onassis, employed as an engineer on the largest, most luxurious privately-owned ship, the Christina. Gerasimos has labored endlessly in his effort to restore the Odysseia. She is now his rightful platform to share with you his passion, his “ODYSSEIA”, a tale of epic proportion and his belief that Lefkada is the home of ancient Ithaki.

Mariedo came from France on a discovery trip across Europe and was soon captivated by the light, colour and fauna and flora that are found in abundance in Lefkada.
Fascinated by the local culture and customs, she soon became deeply rooted to life in Lefkada and so it was that Mariedo and Gerasimos traditionally married in Nidri in 1985.
Today Mariedo is the executive manager of the Odysseia, in charge of the daily management of the ship. Another of her duties is public relations that she fulfills with her delightful sense of humor, combined with an amazing skill of languages as she is fluent in French, English, Greek and Italian.

From a young age, Dimitris has been by his father’s side at the helm of the Odysseia. Helping his family in any way he could on and off board has always been a priority for Dimitri, from preparing and caring for the Odysseia to managing the promotion and sales of the business. As a top student, his studies then became the focus in his life and took over as he went onto his chosen university (National Technical University of Athens), where, after several years of hard work and long hours, he successfully graduated as a Mechanical engineer. He has now returned to Nidri to raise his family and take over the Odysseia as future owner and captain.

Our guide on board, fluent in English, Italian and Greek, Katerina’s duties include an accurate account of traditions and customs in the village tour of Spartohori on Meganissi. Katerina will ensure that all visitors go home with an in depth knowledge of the area.

Head of the Sales team, having an exceptional talent in languages beeing fluent in Greek, English, Italian and Spanish and constantly working on learning new ones. With his outgoing personality, Adonis will be happy to welcome you in front of the boat on Nidri’si harbor every evening.

Started as an apprentice sailor in 2005. Nowadays, he is one of the most valuable assets of the Odysseia, as he has evolved into an experienced sailor, an amazing cook and a cheerful character on board. 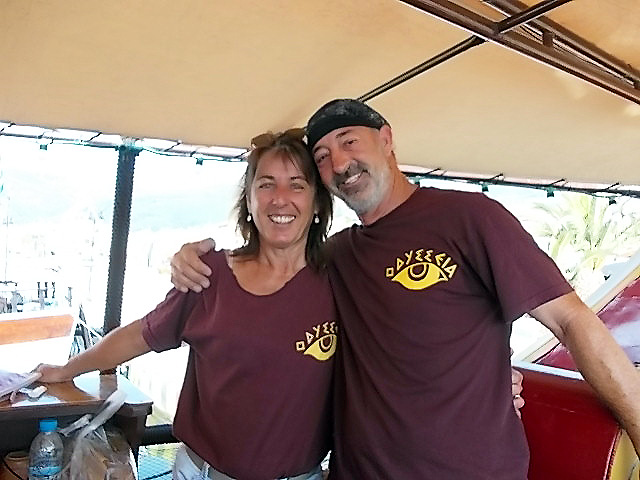